Following right on the heels of the New Wines of Greece event, the Wines from Santorini strutted their stuff. Santorini is one of the most interesting wines in the world with a back story dating to 1650BC when the volcanic island exploded leaving only a knife edged caldera rim and caused the tidal wave that destroyed the Minoan civilization on Crete.  It is in fact considered the source of the myth of Atlantis sinking into the sea. You’ll be able to read more about Santorini on the website we’re working on (not live yet, but I’ll announce when it is).

But since we couldn’t take everyone to the Aegean, we brought the island to NY…representatives from many of the wineries were here including Paris Sigalas of his eponymous winery and Stela Kasiola, Marketing Manager for Santo Wines, (that’s her in the picture and that’s Oia above my left shoulder) the coop that works with all the wineries and is overseeing the EU-funded promotional program and a host of importers including Ted Diamandis of Diamond Importers and Sam Catechis of Stellar Imports.

Event attendees left with a fascinating gift bag including miniature replicas of the basket vines as well as the very special tomato paste and caper leaves and berries that are hallmarks of the island.  They also brought over some of the volcanic rock that makes up what’s called “soil” in Santorini.  Lacking any signficant clay, Santorini is phylloxera-immune.  And because of the unique heading system used to renew the vines when the baskets get too long, many of the vines are hundreds of years old…nobody really knows how old. (Well, none can be older than 1650 BC…they might not have phylloxera, but they do have earthquakes.)

Most folks recognize Santorini, or more properly the town of Oia perched at the norther tip of the caldera for its iconic imgery of white washed buildings, blue domed churches and windmills overlooking an impossibly sapphire-blue sea.

But it’s that iconic image that has made it a world famous tourist destination.  The downside is that many of the vineyards are more valuable as land for hotels than for making wine.  So a big driver of the promotional program is to raise awareness of the prescious resource that Santorini wine industry represents, and the jeopardy it’s in from the relentless pressure of tourism.

So the best thing all of us can do is celebrate Santorini by buying some of their wine.  The key grape varietal is Assyrtiko and while it is sometimes planted elsewhere in Greece, it reaches its apogee in quality and expression of minerality,racy but balanced acidity and alcohol.  One of the noble grapes of the world, the natural affinity between Assyrtiko and seafood is one of those sublime things we get to enjoy so rarely in this world.

And it’s not just Assyrtiko.  Did you know the name VinSanto originated from Santorini (Wine from Santorini).  It’s a sticky that’s spectactular with a nice balance of acid and sugar and we got to taste some old ones that blew my mind.  The rule of thumb I use is that the more it looks like used engine oil, the better I like it.  Nykteri is another specialty wine of the island, also with a unique backstory…it’s harvested only at night.

Santorini is born from the sea, and the wines she makes marry with seafood in an almost magical way.  OK, so maybe you can’t get on a plane and fly there tomorrow, but you can go out and buy the wine and see what I’m talking about!

Spec Creative: Not a Good Strategy 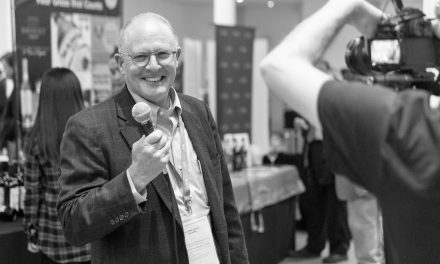