The day dawned clear and bright punctuated by the sound of the fire trucks hosing down the streets from the night before. One more day to go, so we started off with dessert, I mean breakfast, at Brennans with Jonas Halpren of Drink of the Week (who also happens to be a mucketymuck at Federated Media.) We also saw Jeffrey Becker and his wife Jane Scott there.

If you’ve never done it, Breakfast at Brennans is a NOLA must…the classic meal is an order of baked apple swimming in triple cream, then Eggs Hussar, Brennan’s twist on Egg’s Benedict, and then to top it all off, Banana’s Foster, flaming dessert of bananas, ice cream and more cream. It’s a healthy breakfast though…think of all the fruit. After that, you don’t have to eat for a week. Unfortunately we had two other big meals planned that day, so we started to work off the calories with some hand to mouth exercises at the seminars.

I attended Robert Hess’s seminar on the History of Alcohol which was quite stimulating (hehe) and then it was time for yet another meal, this time with Colleen Graham of About.com and her husband at Luke on St. Charles Ave. I had a light meal of soft shell crab BLT with fries. Coming from Cedar Falls IA, Colleen was interested in all the publicity about the NY Cocktail bars like PDT, Death & Co., Pegu Club et al. Another fun conversation learning about how Colleen’s needs differ from many of the other bloggers…she’s already figured out how to monetize her writing…she just needs the help in building traffic and click-throughs (Maybe a hyperlink to her site will help….you should visit and click through on a link).

and with Ted Breaux as panelist. Simon may protest he doesn’t like to speak in public, but he sure knows his stuff. He’s also one of the nicest guys in the business. Good thing that he decided to shave his head…now we can tell the difference between him and Simon Ford.

But we’re not done yet…off to Emeril’s restaurant NOLA for dinner with Matt Robold of Rumdood and his girlfriend. Boy, I thought I talked a lot. Matt recognizes he’s got a problem…you just can’t get him to shut up…but he’s in therapy for it (I’ll tell you his dirty little secret…he ordered a Cosmo…it was pink. And I don’t think it worked.) I ordered a fabulous bottle of Domane Wachau Gruner Veltliner Federspiel 2007 and nobody wanted to talk about it. This was definitely a spirits gig and wine was of no interest whatsoever (hey, they’re wussies…they spit!)

Pernod’s Spirit Awards were held at Harrah’s again and Marissa Frisina and Shawn Kelly topped their efforts from Wed. nite with an absolutely bangup show. Lots of fun, lots of awards, lots of camaraderie…and lots of liquor!

I had hoped to call it a night, but duty called. Sam and I taxi’d over to the Mixo house to say goodbye to the gang, and then it was off to the Bartender’s Breakfast back in the Quarter. For the THIRD TIME Shawn and Marisa hit a home run at one of the most beautiful locations for a party I’ve ever been in. Everyone was there with celebrities mixing the drinks including many of the night’s award winners.

I was chatting with Steve Olson of AKA Wine Geek and write Dave Wondrich two founders of BAR and we all agreed this was like a college fraternity reunion on steroids.

And so to bed.

At least for me…I had a 7AM flight out of MSY the next day and was on the same plane as Steve Olson…we exchanged some hoarse hello’s and Steve told me he never even went to bed…”That’s what planes are for.” Too true. 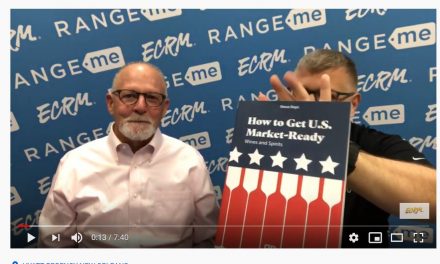