Our clients from All About Greek Wine hosted a contingent of guests on a trip to Santorini courtesy of Wines from Santorini in June and we came away with some interesting perspectives to add to the incredible vistas.  Attending the trip was Christie Dufault who’s a sommelier at RN47 and teaches wine at CIA in Napa, her husband Jordan Mackay a freelance writer for the NYT and other print outlets and author  of “Secrets of the Sommeliers”, Greg Dal Piaz editor of Snooth, Jon Troutman who works with Gary Vaynerchuk on Daily Grape, and me.

Jon Troutman, George Athanas and Greg Dal Pias in Oia discussing the itinerary for the week.

Quipmeister Jordan Mackay noted, “There’s just no way to shorten the name of Assyrtiko in my notes.  Three letters don’t work and a fourth isn’t much better, so you might as well go with the whole name.”

Alder commented at our visit at Karamelegos that “it may be an American perspective, but how cool is it to have a tasting at a winery run by a guy named Artemis, with wines poured by Antigone.”

At Canava Roussos, founded by Agape Roussos’ ancestors in 1836.  A lovely tourist stop for sure, but what’s particular nice is that it’s a working winery.  The way they make the wine hasn’t changed much, still using the traditional rooms for grape crushing by foot, wicker baskets for transferring the grapes from the vineyards, and fermenting barrels of Russian Oak over 100 years old and still in use.

A delightful surprise was the mavrathiro, a sweet wine made from the eponymous red grape. It can’t be called “Vinsanto” because the modern law says Vinsanto can only be made from white grapes.  Canava Roussos’ mavrathiro is a traditional wine, historically produced as “Nama” wine…which the locals produced as a gift for the church and the wine was used as sacramental wine in the many churches that dot the island.

Blue just doesn’t describe the color that dominates and defines Santorini… I’ve referred to it as impossibly blue, a blue that is so intense it almost hurts the eyes.  Doorways, windows, and of course the ubiquitous church domes are painted a classic blue that accents the sapphire blue sea and paler blue sky that dominate practically every view.

The town of Oia on Santorini

Another view of Oia

We got a  wonderful presentation of all that makes Santorini unique by Dr. Yiannis Paraskevopoulos, Bordeaux-trained, and professor of oenology at University of Athens.  One key feature of the island is that the volcanic “soil” has 0% clay, so not only is it phylloxera-free, it’s phylloxera-immune.  Santorini wines are the expression of terroir itself.  Minimal intervention…little sulphur is needed because of the natural high acidity and low pH of the wine.  The vineyards are effectively organic (though not certified) because there are very few pests, little problem with mildew because of the dry climate, not irrigated and not fertilized.

Santorini also “he oldest vineyard on the planet.”  Because of the way  the vines are “headed”  (cut down to the soil surface and a new vine emerges from a dormant node) every 80 years or so.  It’s known it’s been done at least five times on his land, so we know that the vines are at least 400 years old.  And they’re descended from the vines that survived the cataclysmic eruption of the volcano in ca. 1630 BC This is part or the story of Assyrtiko’s minerality.  But because of the nearness of the Aegean Sea, the constant winds depositing salt from the sea mists that contributes a briny note, and accentuates the minerality.

One of Gaia’s wines is called Thallasitis, meaning “Wine from the sea.”   Historically  the ancient Greeks would blend wine with seawater and use it as a tonic to promote health.  In a way we do that today, because the influence of the sea spray on the vineyard influences the wine we make today.  Taking that idea further, in  a quest to understand how Assyrtiko lives, Paraskevopoulos has combined his passion for diving and winemaking and “cellared” 500 bottles in the ocean (his winery is located literally on the beach) and plans to do that each following year to learn how the wine ages with absolutely no interaction with oxygen.

Yiannis told a story about having purchased a rare, perhaps unique, 150 year old bottle of wine made in Santorini.  “We were surprised that not only was it still alive and still kicking, it really brought home to us the fact that we in Santorini have much to learn about the potential of what is really possible here.”

While we went cocktail-less for the week, Greg Dal Piaz coined a new drink concept:  “Santorini-tini”…use Gaia Retsina and Gin. 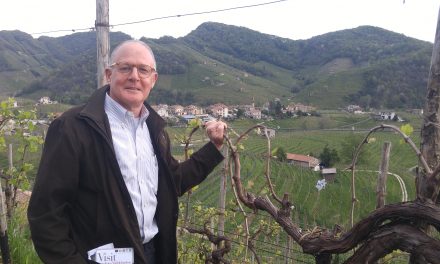 Top 10 Mistakes Export Wine and Spirit brands make in the U.S. market-and how to avoid repeating them