Constance and I will be attending the American Wine Bloggers Conference in Portland, OR this week.   This year’s event was sold out early and word on the street is there’s a waiting list of upwards of 50 folks hoping for someone to drop out.

We’ve been following the evolution of the AWMB over the last few years. I think it’s safe to say wine blogging in the US hasn’t reached full maturity yet, but it’s certainly past puberty (although 1WineDude author Joe Roberts’ voice still breaks occasionally).

I’ve maintained that the key event marking that change was the day Tyler Colman (Dr. Vino) “outed” Jay Miller of the Wine Advocate.  Since then wine blogging has begun to settle out into three cadres: a handful of major influencers, a larger group of stalwart and committed writers, and a new generation of budding aspirants.

Unfortunately no one has figured out how to make a living out of blogging per se. Even elder statesman Alder Yarrow of Vinography is quick to comment that he does it as a passionate avocation. But a whole lot of people have found ways to realize their newfound importance in ways other than cash money, be it travel to regions and countries courtesy of the generic promotion boards or recognition among the blogerati.

In the early days, free samples were the motivator for many, but most “names” quickly came to realize samples were a mixed blessing… too many samples, too much packaging, too many pushy PR people who all too often never read the writers they’re harassing.

Our approach has always been focused on the principle of WIIFM (What’s in it for me?), meaning providing quality content and access that’s of value to the very different audience each blogger has created. And while I admit I’m simply not able to read every post by every one of our friends anymore, we have found ways to keep our finger on the pulse of the conversation and stay engaged. This year, we’re pleased that Constance Chamberlain has been recruited to be one of judges for the wine blog awards, which is itself a sort of award.

So, what’s next?  That’s one of the questions I’ll be asking my fellow attendees. 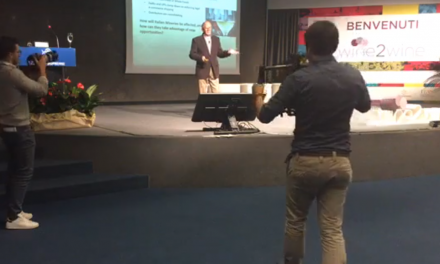 Globalization of Groups and the Mechanics of Social Media