U.S. Excise Tax Reduction: by the bottle/by the case 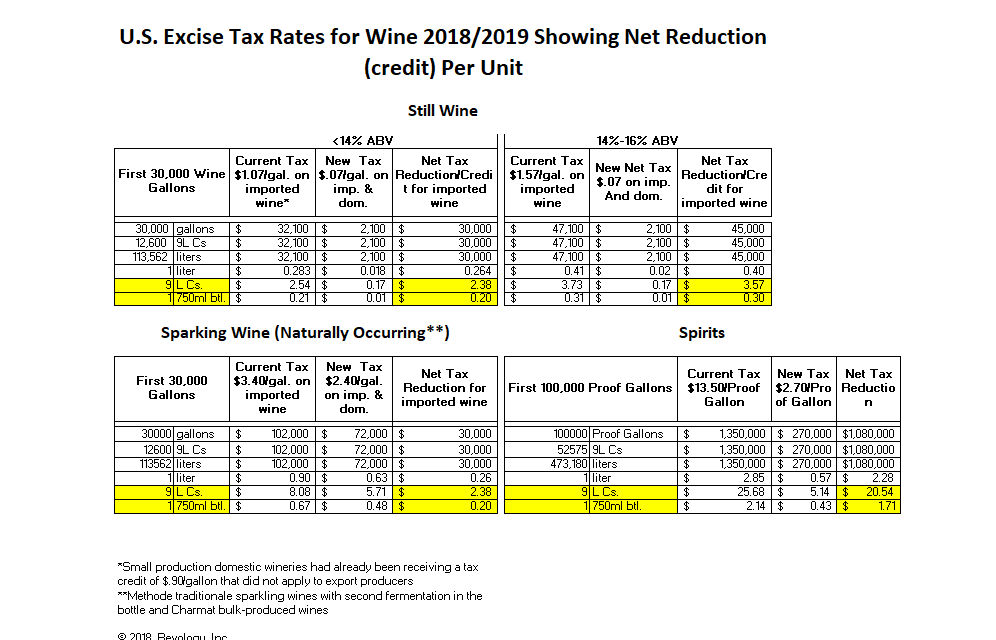 Here is a handy chart I created that shows the net Excise Tax reduction for wines and spirits resulting from the new “Craft Beverage Modernization and Tax Reform Act” (CBMTRA) as it applies to imported brands. Highlighted in yellow are the net savings per bottle and 9L case for each situation.

A caveat: The wine data applies to imported brands only. That’s because “small domestic wine” producers (defined as producing no more than 250,000 gallons) are already receiving a significant tax credit on their first 100,000 gallons of production. So their actual net tax savings will be less than imported brands.

For those of you confused by the term “Proof Gallon”, here’s a link to TTB’s definition.

And a little apocryphal lagniappe regarding the history of the term “proof.” Ever wonder where that comes from? The story I’ve been told is that it dates back to colonial times in America. Back then farmers found it was easier and more profitable to distill grain into alcohol and transport that as a higher value product. And in order to validate the alcohol level in the barrels, they figured out a way to “prove” it. They did that by mixing gunpowder into the alcohol and lighting it on fire. If it burned, it “proved” the alcohol was of sufficient concentration.

“My wine is really great.” Really? That’s Your Point of Difference that Makes a Difference?

Six Myths of Social Media Marketing, with a note on costs.